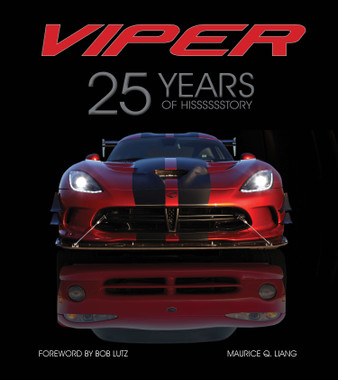 Sorry but this item is currently unavailable.

Please check back at a later stage.

A limited-edition 272 page hardbound book covering the entire history of Viper from the original concept car in 1989 to the end of production in 2017.

Chrysler shocked the automotive world when it unveiled the Dodge Viper RT/10 concept car in 1989. No one expected a car this audacious from a mainstream manufacturer, least of all Chrysler corporation, who was building boring K-cars at the time. The Viper featured a big, torquey V-10 engine with an unheard of 400 HP, two seats, four huge tires, and a voluptuous body that was sexy and mean at the same time. Enthusiasts begged, pleaded, and demanded that Chrysler build it. And they did. The production car launched in 1992, and for the next 25 years, it evolved through five generations, holding the title of America’s supercar.

For the first time, all five generations of Vipers are captured in one book. Each generation is described from concept drawing to production. This book documents highlights from Viper’s history as well as behind-the-scenes stories. Included is never-before-published material from the author’s personal collection as well as new material from interviews with former Team Viper members.

This book is written by Viperholic Maurice Liang, who is a longtime Viper owner himself, Founding President of two national Viper clubs, and author/photographer of two other Viper books; the Viper Buyers Guide and SRT Viper—America’s Supercar Returns. Guest author Shawn Romig documents Viper’s illustrious racing legacy and the foreword is written by former Chrysler president and father of the Viper, Bob Lutz.

Now that Viper has driven off into the sunset, the complete story can be told. These books were not stocked by or sold through book stores, and most were pre-sold, but we were able to obtain a few extra copies. When they’re gone, they’re gone for good. Get yours now!

This product hasn't received any reviews yet. Be the first to review this product!

All prices are in USD. Copyright 2020 Viper Owners Association. Sitemap |